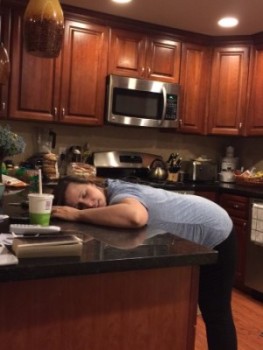 Things are still going well. Gavin is weighing in at 4 pounds, and Evelyn at 3 1/2. Nicole is still healthy and doing well, but she struggles with getting up-and-down from couches or the bed. Now that Nicole’s mother, Brenda is here things are getting quite a bit easier for Nicole. Nicole is always been an excellent housekeeper, and not being able to vacuum or sweep as much as she likes really gets under her skin. Fortunately Brenda has been able to pick up the slack and is keeping the house in order.

Well, it seems like we are in the final stretch. We are attending appointments at least once, but more often twice a week. Nicole has started the non-stress tests, which according to Nicole can be bit of a misnomer! A non-stress test is where they place three monitors on Nicole’s belly. One to hear each of the babies heartbeats, and one to monitor for any contractions. They can be a bit nerve-racking because sometimes they can’t quite find the heartbeats, and so that drives the stress level in the room up a little bit. Fortunately Nicole has had absolutely no contractions! She is handling this pregnancy in a way that amazes most other women. We had attended a moms of multiples group a week or two ago, and all of the women were just blown away that Nicole is still up about at 32 weeks with twins!

Our outings are becoming more and more limited. I wasn’t with them, but the other day Nicole and Brenda were at Fred Myers, and Nicole had to sit down to take a break in the midst of their grocery shopping. We went to Kohl’s and Home Depot the other day and halfway through our shopping at Home Depot, Nicole had to go back to the van to sit down. Most of the time we’re only making a trip to one location and then coming back to the house. Nicole is doing a great job of taking care of herself however. She’ll do whatever she’s doing for a while, then sit with her feet propped up for an hour or so before going back and trying anything else. Nicole has told me that she kind of feels bad because I haven’t been able to get out of the house as much, so either Monday or Tuesday were going to go out and see a movie.

Going to see movies has been interesting for a long time, even before Nicole was pregnant. We tend to go to the early shows, those before noon, because they’re much cheaper. However, with the early bird crew we’re the only people in the theater without an AARP membership! It really does crack us up, but I guess we do belong since I am retired!

There certainly are things that you don’t hear about and that are not prepared for during pregnancy. Many of them have the do with physical changes to the body, but one thing that I had absolutely no clue about was the mental effect that pregnancy can have. Neither of us have a great memory, but nowadays Nicole can’t remember anything to save her life! She’ll walk into a room and have no clue why she did it, or I’ll ask her for something and she’ll do something completely different. Another thing that is just hilarious is Nicole’s diminishing coordination. She has fumbled and dropped many items, but watching her try to eat or feed me is just too much! The other day she dropped food off her fork that bounced off her belly and back onto the plate! Moments later, she dropped another piece, bounced off her belly that landed on the floor which one of our dogs got. She even had food on a fork, put it in her mouth, and then it fell out of her mouth! We were just dying in the kitchen, unable to believe what was going on during that meal!

It really is incredible, and sometimes I just don’t have the words for it, but it is something else going through this process with Nicole. Watching her belly grow, and knowing that our children are on the way is amazing, but the fact that we can find levity and joke around about things like that really are special too. Don’t think that I’m trying to make fun of Nicole by posting this stuff, but it really is stuff, that in a way brings us even closer going through this whole process.