The Attack is Real

If you haven’t noticed, there is a war being waged against Christianity. The politically correct movement in our country is doing what it can to stamp Christianity out. Not only that, but this administration has done absolutely nothing to support Christians, and the Christian values that this country was built on.

I’ll be the first to admit that for most of my life I’ve been a lukewarm Christian. There was even a time after my injury that I turned my back entirely on Christ. However, the more I see this war being waged, the more I desire to come back into the fold.

If you are a conservative Christian in this country, you are now the minority. Unless you are a non-Christian, the media and our PC culture will tell you you are wrong. Especially during this season, it is painfully apparent that this oppression of faith is indeed all too real.

It isn’t just faith-based beliefs that are being attacked, either. Things that have been icons of American culture are now ridiculed and despised. Christmas trees and Santa are being banned from schools. The Pledge of Allegiance is often under attack as somehow unconstitutional, unjust, unfair. Not only is Christianity under attack, but the very values that we as Millennials learned to embrace.

I’d like to clarify something about the last paragraph. I know I said that Christmas trees and Santa were being banned in schools. The fact that those items are being banned is not my point; it just goes to show that Christmas in its entirety is being removed from our culture because it isn’t politically correct.

One thing I’d never given much thought to is the shortening of Christmas to X-mas. It might not seem like a big deal until you look at it like this: that X is eliminating Christ from Christmas. This is something that my father told me a long time ago. It has stuck with me ever since, and I hope it’s something that gets you thinking.

A lot of my posts have been geared towards conservatives, soldiers that I used to serve with, and a healthy portion of Generation Y, mainly because I share a lot of ideals with those demographics. Something that hit me recently though is the fact that I need to focus more on Millennials.

I recently became a father of twins. Gavin and Evelyn are the most precious things in my life. Seeing the world in the state of chaos that it is in really got me thinking about how I need to raise my children. Like I said before, I have never been a very strong Christian but I am doing my best to change that. I hope to raise my children with solid Christian values. I know that I won’t be doing this alone, as my wife and our friends have a faith built on a firm Christian foundation, faith that will guide us through our journey.

In this politically correct era that our country is going through, we need to stand firm. If you call yourself a Christian and are my age with children, do everything in your power to raise your children in a Godly manner. We need the next generation to have pride in their faith, to not be afraid of the culture that is telling them their religion and display of faith is wrong. It’s time to come out of the shadows.

I am re-building my house… No, my battlements, and they are no longer built on sand. 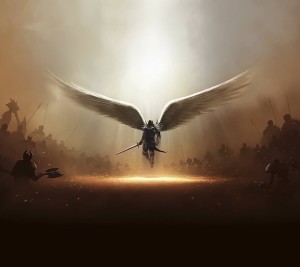