So the hospital stay was pretty uneventful. The only real thing that occurred was Evelyn’s blood sugar dropped the night before the day we were supposed to be discharged, so we ended up staying until Friday. Five days, two healthy babies, and mama on the mend… Couldn’t ask for much more!

Coming home was great. Tank was super excited to see Nicole again, and was beside himself trying to figure out the babies. The way he was sniffing them, you could tell he was thinking something like “you smell like a human, but you don’t quite look like the ones I’m used to…”

We had totally expected Emma to love the babes we expected her to be crying next to their crib and jumping up trying to be near them. She couldn’t have been more standoffish if she had to. It was clear that she was very jealous, and stayed clear of all of us for a couple days. Tank however just loved them! Every single time he came in the room he ran right up to them and sniffed them, just to make sure they were okay. Even when he came in from being outside, the first thing he would do was run right up to them and check them out. Being the large dog that he is, sometimes he accidentally would knock them when someone was holding them, and it’s just hilarious to watch him lick the side of their faces!

It truly is amazing watching seeing how different Evelyn and Gavin are! Gavin sure is a sleepy fellow, while Evelyn is constantly wide-eyed and looking around. They both cry, like babies do, but Evelyn is the loudest thing I’ve ever heard! She has the most shrill and piercing cry, and she gets me quite often. Both have very distinct cries as well, and sometimes it can be rather comical listening to them.  Gavin continues to outgrow Evelyn  at a steady pace. She is quite petite, but Gavin’s becoming a bit of a chunk! 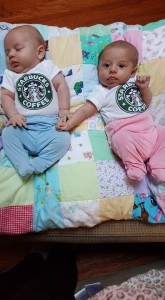 Good size comparison, and Gavin’s asleep while Evelyn is checking things out!

We’ve also had a good bit of company recently. Over my birthday, about a month after the babies were born, my folks came out to visit. It was a great time, we could tell that my folks were just smitten by them. There wasn’t a moment when either of them were holding one of them. Dad stayed for one week, mom stayed for two, and it went really well. I know they can’t, and we can’t wait for them to get back out here again.

Nicole’s sister Casey was able to visit in mid November as well. She is super excited to be an aunt, and we had a great time having her up here. Looking forward to next time she gets a chance to visit!

One of Nicole’s best friends also came up and visited. She has a son who is seven months old, and it was striking to see the size comparison! Her son is a big boy, and he truly dwarfed Gavin, who we think is big! It is kind of funny seeing other babies and talking about them, because technically Gavin and Evelyn were three weeks premature. I know that with multiples they don’t allow mothers to go full-term (40 weeks), so hearing the 37 week due date for so long, you forget that they are coming early. You can’t compare multiples to singleton babies, especially at certain benchmarks i.e. crawling, sitting up, focusing and tracking. It’s super exciting to see them progress!

We have been able to get out a bit recently. It is quite an act, although we seem to have it down pretty well. The thing that stinks is the fact that we have to take two cars whenever we go out. Nicole has to put the car seats in her VW, and then I have to go in the van. Apparently there is some bar under the seat in the van that does not allow for both car seats to be placed at the same time. We will be looking for a new vehicle shortly.

All in all, I couldn’t ask for more. I’ve never seen a more beautiful sight then watching Nicole dancing and bouncing around the living room, humming along with the “Christmas Vacation” song, trying to sooth one of the babes. I’ve never been a very outwardly emotional person, and tend to be rather guarded, but watching Nicole with our children warms my heart beyond anything I’ve ever known. God has truly blessed me, and I literally have no more words. 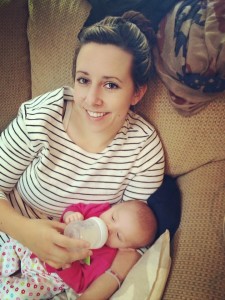 An absolutely beautiful picture of Nicole and Evelyn, courtesy of Nicole’s sister Casey. 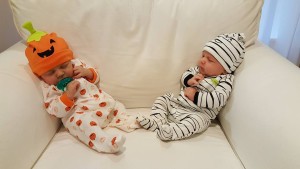 Halloween! Evelyn is on the left as a pumpkin, and Gavin is the mummy! 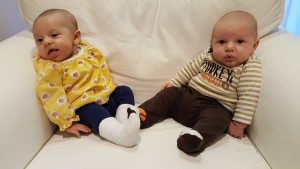 We had a good Thanksgiving. You can tell how much each has grown!