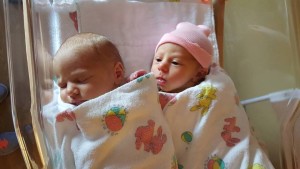 So, Monday, September 21 Nicole was scheduled for a C-section at 730 in the morning. We had to be there at 530, so naturally we were both awake at 245! Got just enough sleep, but were way too excited to sleep anymore!

We get to Swedish at 530 and Nicole got gowned up, got her IV, and then they got her hooked up to the fetal monitor. While she was hooked up, she could feel a little something, but wasn’t sure what it was. She asked if she was having a contraction, and sure enough she was. She had minor contractions every four minutes, and a big one about every 10. Nicole hadn’t felt any contractions at all through the latter portion of her pregnancy, so it was interesting.

It’s a good thing she was going in Monday, because the Friday before she got hit with all kinds of pregnancy symptoms! The babies dropped, she had lots of swelling, heartburn was way worse, and she just couldn’t do anything.

After Nicole got her gown on, it was my turn! The nurse came in, looked my chair over, and said “I think I have a few ideas.” First, she busted out the sterile wipes and then proceeded to clean the bottom half of my chair more thoroughly than it probably has ever been done! Then she draped me from the armrests down in sterile drapes. I received some sort of sterile smock, which we cut down the middle so that once the babies were born, we could immediately do skin on skin. She then taped that cut thoroughly! I had to have a cap on and lastly a mask over my mouth.

Now to most of you out there, no big deal. But, when you operate your chair and phone with your mouth, placing a mask on your face becomes a bit of a problem! Boy I tell you though, she had that figured out too! First, she taped the mask to my straw. Worked out pretty good, except now the mask wasn’t too close to my face anymore, and was riding up my nose because of the straw. So she taped the mask to my nose! I certainly was a sight to behold, as the pictures show! 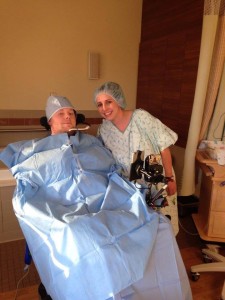 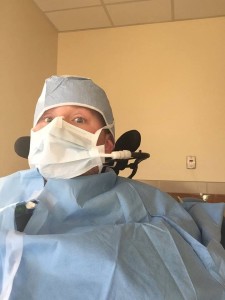 We role into the OR and Nicole gets her spinal. Basically better than an epidural, and different/better side effects. They get Nicole laid down on the bed, get the field in place and go to work! Fortunately, they allowed Brenda and I both to be in the OR, and it was quite an experience! Evelyn came out first at 8:21 AM just SCREAMING! I have never seen anything so small make such a loud noise! The surgeon handed her off so the crew to do their checks on her, and then came Gavin. At 8:22 AM, Gavin came out, and he was very quiet. They did the checks everything was well with him. Then they decided to hand us the babies. Nicole was still being worked on, but the nurses gave Evelyn to her, and Evelyn immediately went to the breast and started feeding! And on my end, all the hard work that the nurse went to paid off. They peeled off the tape, unzipped my hoodie, and placed Gavin right on my chest. 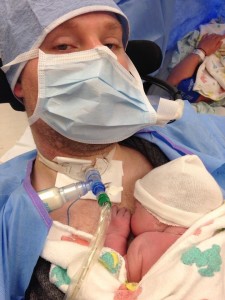 There really is no describing the feeling that we all went through. I’m afraid it’s one of those things you just have to experience for yourself. All of our eyes welled up, and we were just in awe of the two miracles that had just been brought into the world!

After the surgery, we rolled back into our recovery room. Everyone was just smitten by the babies, nursing staff included. That ended up being a bad thing. The nurses allowed Nicole to set up just a little bit, and one of the side effects from a spinal/epidural is nausea. While we were all checking out the babes, Nicole was throwing up off the side of the bed, and trying to get our attention. That really sucked, because Nicole needed medicine to help control the nausea, and then she also received IV painkillers, because while she was dry heaving she strained her stomach and the C-section site. Just talking to Nicole, she mentioned that that whole first day was kind of a blur because of those drugs. 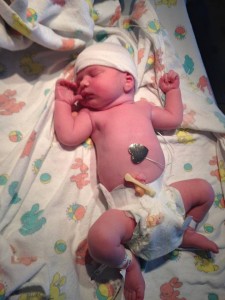 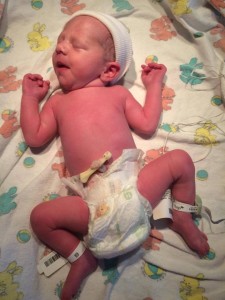 The staff at Swedish was just great. Our doctor/surgeon is an amazing woman and I am really happy that we had her to guide us through this experience. The nurses and lactation consultants and everyone else were an incredible help, and I know they focused on Nicole just as much as they did the babies.

We had a few close friends come visit that day, and it was just perfect. The love and affection that we have for our new babies is beyond comprehension.

Sorry that this one took so long to publish. I kind of hit a writer’s block… Just so much going on I was kind of blinded by everything. I will get subsequent posts up much sooner!